Our community needs YOU!

The Gift of Giving

Nancy, one of our clients, came to Love INC with a different kind of request. She needed help, yes, but it wasn’t for herself: it was for others. She wanted to purchase Thanksgiving dinners for a group of elderly disabled people living in her apartment complex. Almost none had any sort of transportation. Some were partially blind. Some had debilitating mental illnesses. Many had no family to assist them.

On a regular basis, Nancy tries to collect groceries for those neighbors from various food pantries.
She goes to Loaves and Fishes to bring groceries to about a dozen of “her folks,” as she calls them, who are not able to get to any store. And she’s been alarmed at times that some of them have almost no food at all. “Susan,” she told me, “all this lady had to eat was a can of soup!”

So now, Nancy and a small group of friends were working on this Thanksgiving project together. She wondered if Love INC might assist and provide gift cards toward the meals. And with all of her amazing initiative, she would be arranging for pickup and delivery of the meals; she was doing the legwork—all she needed was a little backing.

For perspective, you have to know that Nancy has been helped by Love INC partner churches time and again over the years. One of our churches in the county con- tributed funds toward several financial needs that Nancy incurred in the past. They knew her well and thought highly of her. In fact, this church vouched for her a number of times, saying that Nancy had worked with them repeatedly and was very trustworthy. So when she asked for help for her neighbors, I knew the need was real.

In some ways, Nancy is the perfect Love INC client. She is needy herself and has oftentimes come to us for help. But at the same time, she is a giver—someone who understands the gifts she has received and wants to pay back any way she can, in this case with heartfelt effort.

I asked Nancy to give me a list of the folks she wanted to assist. Not surprisingly, most of those on the list were people we have worked with in the past. Quite a few of them had recently moved from Crescent Hall on South First Street when the remodeling crew broke through some of the ancient plumbing and flooded the building. Others had struggled with home- lessness off and on.

A quick email for gift cards, and in a week, there was more than enough to cover all that was needed. Thanks to Nancy and the generous donors from Love INC who support us, 36 elderly and disabled people received hot meals! Praise the Lord for laying this need on our doorstep at Thanksgiving.

Trying to Pull a Rabbit Out of a Hat

Sometimes an old story can pave the way for helping somebody today. In 2009, Love INC volunteers had rallied around a devout but destitute family several counties south of Charlottesville. Their infant daughter lay in critical condition at UVA Hospital. The social workers there telephoned Love INC about the family.

It all began when, a week or so before Christmas, Pegasus had flown a newborn baby girl to UVA from MCV in Richmond. She had been born there with heart and lung defects; her tiny life was hanging in the balance. Only a complicated surgery at UVA would save her. The parents had been in Richmond at the Ronald McDonald House ever since the baby’s birth 10 days before, and they were emotionally exhausted. The young man’s parents had joined them to provide support. All of them had just arrived from Richmond to find that there was no room at the Ronald McDonald House here in Charlottesville.

At least a dozen churches assisted, providing monetary donations, volunteers, and even prayer chains. Though the initial operation went well, the tiny body did not respond as well as hoped. Her kidneys refused to work and her body filled with fluid. Infection set in and her blood pressure dropped. She could not breathe on her own. On top of this, she began to have seizures, a condition passed to her genetically.

To make matters worse, the family’s other child, just a toddler, was rushed to the UVA Emergency Room with uncontrolled seizures. The grandparents became ill and had to return home, four hours away, only to find the water pipes had frozen in both their trailer and the young family’s trailer. And then another grandchild was hospitalized with another health issue! These very dark times would only get worse. Despite the grandparents being on their knees beside the infant’s UVA bedside as often as possible, God called the precious little one home to be with Him.

Love INC staff travelled to the funeral at the Baptist church and attended the reception at the family property, several run-down trailers on a barren hillside. Devotion to the Lord Jesus Christ was evident everywhere, however, and the whole church family rallied around the mourners with great love and care.

That’s a very sad story. However, moving forward to 2021, we have this: Tiffany called from Nottoway County, near Blackstone, as a representative of the local police department. She had grave concerns about a poverty-stricken elderly couple caring for a disabled grandson (no relation to the earlier family). She wanted to know if Love INC might assist. True, Love INC serves primarily Charlottesville and Albemarle County, but we do try to do what we can in other areas that don’t have a Love INC. We offered the usual suggestions: Call the local department of social services and ask for adult protective services; make sure the grandparents got SNAP benefits and medical benefits. Certain medical benefits might give extra assistance at home. Our staff promised to do some additional research about what could be done.

Then we remembered! The Baptist church where the infant funeral had been held—that was right near them! We called and left a message detailing how we knew about the church. We outlined Tiffany’s con- cerns for the grandparents and left her phone number. Several days later we learned that the same wonderful Baptist church that ministered to the first family was now in touch with Tiffany and would be jumping in to help.

It is your support that makes all of these small connections possible. Without it, we couldn’t function—especially nowadays, while we’re still dealing with COVID! For this couple, you have brought about a miracle. Thank you!

God is the Great Redeemer. While He abhors the tragedy of a dear infant’s death, He uses that bad for good, bringing together Christians in comfort and service. It’s no coinci- dence that we had networked with that lovely church in Nottaway County all those years ago. The world may see it that way, but the Lord knows better…and so do we.

It started with a request to get rid of 30 bags of kitchen trash. An elderly couple, Jeff and Loretta, lived in the county and due to some recent medical issues, Jeff was unable to take care of household chores as he had done in the past. And Loretta was confined to a wheelchair. In short, Jeff was contacting us to ask for H.E.L.P!

We immediately called on two of our most faithful volunteers; one was unable to assist because his knees were kicking up a fuss and he was scheduled for surgery. But the other, Ben, went right away and got rid of all their trash. You see, the couple lived in a third-floor apartment with flight after flight of stairs separating them from their dumpster. Ben had not only removed the 30 bags of trash, but he sat and talked to the couple and then prayed with them. If there ever was a volunteer job requiring more of a servant’s heart (besides scrubbing toilets), we’re not sure what it might be. Thank you, Ben for your wonderful heart.

But in the midst of all this, Ben also contacted us to say that Jeff and Loretta were really troubled, they had more needs—a lot of them. He described the problem.

Now it “just so happened” that we had recently received an email from a woman at The Point church asking for an opportunity for Christian service. Perfect timing! We put her in touch and soon she had a group
from the church willing to help Jeff and Loretta each week and run errands or do housework. Because a whole group of people became involved, no one person had to carry the bur- den. Everything was coming together and we felt great relief.

Then two months later, an area physician called Love INC with an interesting problem. She told us she was trying to work with an elderly couple out in the county but was having a lot of trouble communicating, connecting with them. She sensed trust issues. The female patient was wheelchair-bound and seemed rather suspicious; she was refusing to be treated despite having some very serious

We sent an email to the volunteer(s) at The Point and copied the physician. The answer came very quickly: Yes! The doctor’s patient was Loretta! The church group was visiting the couple weekly. They had actually been able to speak with Loretta about treatment. In short, she trusted the Love INC volunteers. She was comfortable with them because she knew them. The doctor was greatly relieved and the volunteers saw how very important their weekly visits were to the well-being of their adopted couple.

Oftentimes volunteers can be the hands and feet, the eyes and ears of Christ where a professional cannot. That’s what these folks did. In this case, the volunteers didn’t have to go it alone but had a kind and caring physician to work with should the patient take any turns for the worse—and now Loretta was taking the doctor’s advice.

Here’s what the volunteer folks from The Point wrote us: “Jeff and Loretta did mention that it’s been difficult finding help, and I think it means a lot to them that our group has been able to come consistently. We’re more than happy to do what we can to help, and I will definitely be in touch to coordinate if they/we identify needs that we’re not quite able to meet as a group.”

Wow. Love INC is so grateful that a church group could take on this couple. Thanks and admiration go out to The Point!

P.S. This story reminds us of Bula, a lovely lady from First Baptist Church here in Charlottesville. She volunteered years ago to minister to someone who had surgery and needed shopping done and trash removed. A social worker had sent us the referral and we were in the dark. Graciously, Bula went to minister to this person week after week. After hearing a bit more about the person’s needs, we knew it was only God who enabled this beautiful Christian lady to step well out of her comfort zone and minister in Christian love. We are so grateful for the way God moves in the hearts of his people. Bula and Ben—and all of our volunteers—there is a place at the Lord’s table waiting for you!

More Ways to Support our Mission 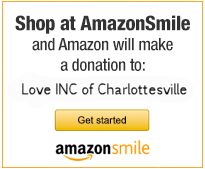